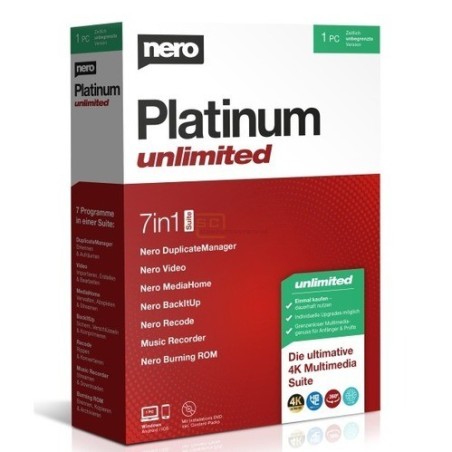 The multimedia fox at your side

The multimedia suite in a new look brings you brand new features and numerous improvements that make everyday digital life a breeze.

Never mess up your beloved photo album again thanks to the new Nero AI: now you can organize, tag, rate, and search photos even easier. AI-based scene recognition helps you keep track of your photos, you can assign names to faces, and duplicate or similar images are detected faster and can be easily deleted. Sort your photos by location and view your adventures on the world map or view all your photos in an easy-to-read timeline. Of course, 1-click photo editing is included with Nero Platinum Suite .. And it works locally on your PC, no cloud required!

Turn your moving memories into a little movie masterpiece in no time: Hundreds of high-quality themed templates for holidays, occasions, and events help you do it. Add professional polish with great effects: Create videos with picture-in-picture, alpha channel, tilt-shift, slow motion, and time-lapse effects. Edit, trim, and export your videos. Get sharper-than-real images with 8K playback. Impress your friends and stream your masterpiece to a big TV. As a gift, you can burn your movie to an optical disc Nero Platinum Suite ..

Music inspires the mind! Now enjoy and discover your stars in a whole new way with Nero Platinum Suite .: Save your favorite songs from all music streaming services easily, quickly, legally, and in the best quality. Edit and trim your music files as you like (effects, fade in and out, volume, etc.). Import your CD collection and easily edit metadata like artist, genre and album art.

Your data is important to us! Convenient and secure backup solutions for you: Back up your valuable data quickly and easily to external hard drives, optical media and now also to your cloud (Google Drive, OneDrive, MagentaCLOUD, HiDrive, pCloud and QLOUD). Create automated backups easily with Nero Platinum Suite ., incremental snapshots, and version management. Protect your data with 256-bit encryption for CDs, DVDs, and USB sticks. Buy Nero Platinum Suite . now at a great price.

Nothing is more annoying than a slow PC. We help you get more performance with Nero Platinum Suite . : Optimize and speed up like a pro from now on: Nero makes your PC faster, updates your drivers, and improves your Internet speed. We give you full control over your PC performance. You decide whether you want to solve PC problems one by one or all at once.

Nero Platinum Suite . offers many other tools that perfectly complement your Windows PC: for example, recovering deleted data, easily encrypting your personal data, or reliably formatting and duplicating media. With Nero Platinum you'll get a toolbox with which you'll be ready for any eventuality.Nero Platinum - Useful tools

What packages are included with Nero Suite?

4 programs in one suite

Nero Video - Play your videos, pictures, and music from almost any device onto your computer, drag them onto the home screen, and create ready-made movies and slideshows with 1-Click Video Story. Complete with music, effects, entry and exit, you can share your movies in a flash. Express Edit mode lets you quickly create projects with creative effects, set transitions, apply great fonts, and let numerous templates do the work for you. Use the 1-click black border remover to make your movies fit for the widescreen TV in your living room. You can also export individual scenes from a long video in one go. Easily create top-notch movies and slideshows, as well as Video DVDs™ and Blu-ray Discs ™ with menu from your vacation memories and much more.

Nero MediaHome - No more endless searching for the right file - with Media Central, Nero MediaHome makes it easy to organize, play, and include music, videos, photos, movies, and TV shows in your projects. Now you can also access your OneDrive online files (Files On Demand) and download them directly at your choice. This saves you a lot of storage space on your PC and you still have your pictures, videos and your music directly available for your projects at any time. Also play your personal archive of movies and TV series, including movie titles and covers, and stream movies wirelessly to your living room TV

Nero Recode  - Whether it's video DVDs*, audio CDs*, video and audio files* - Nero Recode converts almost anything into the video and audio formats that suit you best. Conveniently create job lists for your scheduled conversions. Now all-new: Convert your video files also specifically for use in video discs (DVD-Video™, AVCHD, Blu-ray Disc™). Especially easy is also the 1-click conversion of video discs and audio CDs directly to your mobile device: connect device, select title, transfer, done. The latest mobile devices are also supported. Thanks to Gracenote® you can also sort and play your music tracks on your mobile device by album art.

Nero Burning ROM - In a class of its own. Whether CD, DVD, or Blu-ray Disc™: copy and burn precious data with the proven burning specialist in Nero Standard 2019. It's even easier with Nero QuickStart, which can now also be accessed via drag & drop from the Nero desktop icon. This means that the most important tasks can be completed in no time. With SecurDisc 4.0 including 256 bit encryption, password protection, and disc optimization technology, you can also always be completely sure of the longevity of your files. Even burn audio CDs with ease and quality with automatic sound enhancement and album art

5 GB of free hard disk space for standard installation of all components (including templates, content, and temporary disk space)

DVD drive for installation and playback.

Drive for recordable or rewritable CDs, DVDs, or Blu-ray Discs for

Required third-party components, such as Microsoft Windows® Installer 4.5, Microsoft .NET® 4, Microsoft® DirectX®, or Adobe Flash, are shipped with the product or downloaded automatically if not included in the package.

An Internet connection is required for some services.

For the product to function properly, the devices must be installed correctly and recognized by the operating system.

It is highly recommended to install the latest WHQL certified device drivers.

Up to 50 GB of free hard disk space for disk images and temporary files.

To support NVIDIA® CUDA™, AMD App Acceleration, or Intel® Quick Sync video technologies, an appropriate graphics card must be installed and at least 256 MB of video memory must be available.

Intel® or AMD dual-core processor with at least 2 GHz

LightScribe host software must be installed

*Note: In rare cases, errors may occur when processing files with the specified formats due to codecs, bitrates, or frame rates used. 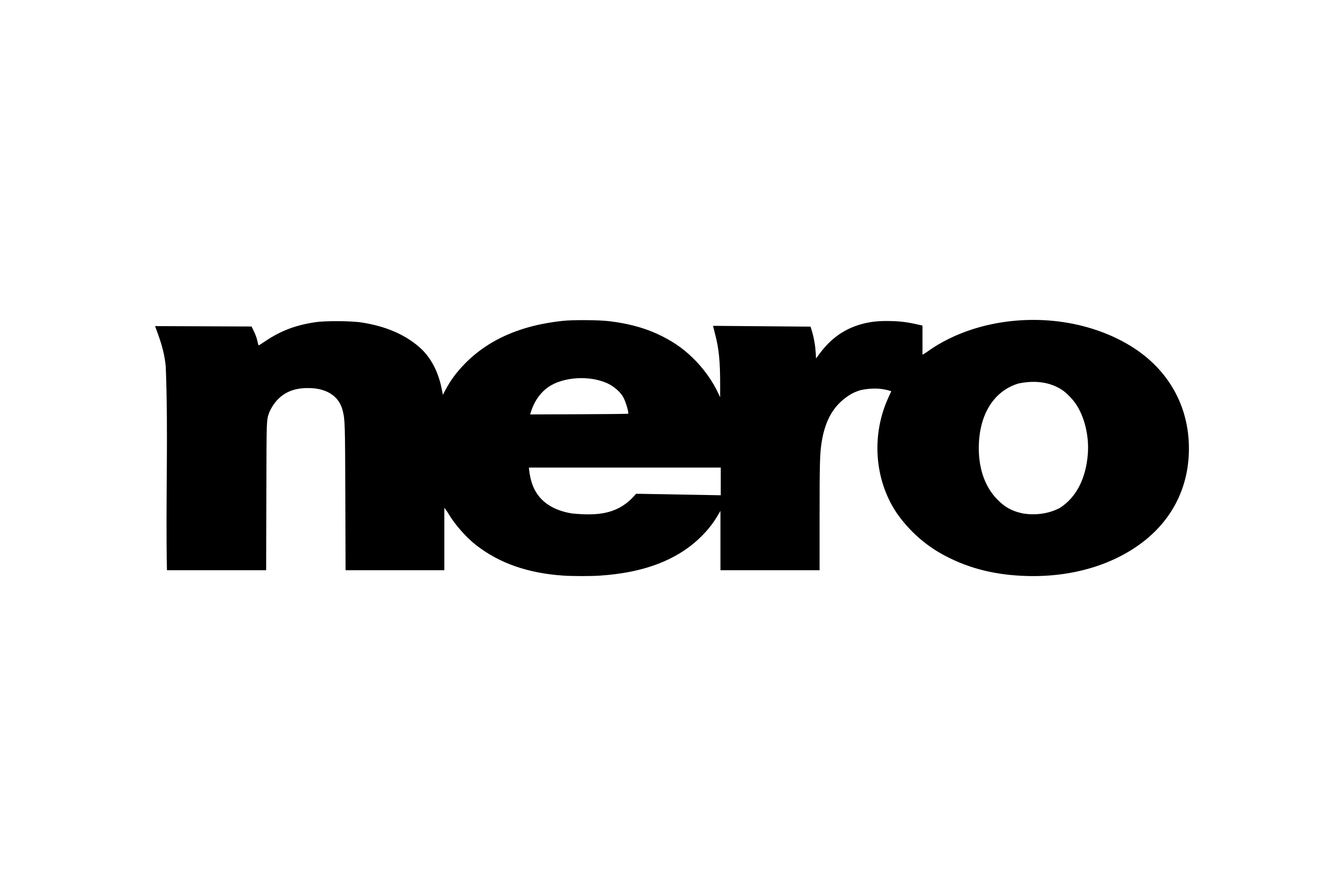 Be the first to write your review !

1 other product in the same category: 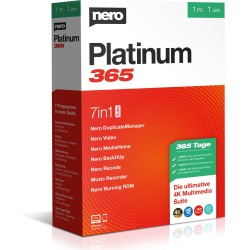